OUR MAIN FOCUS LAYS ON

A  MODEL TO TAKE CLIMATE ACTION FOR CITIES

THE IDEA OF THE MODEL

The 5-Dimensional Climate+Scenario model is an initiative of RUPD GbR to empower the policy and decision makers to take sustainable action by bringing invisible critical/hotspots into their eyes through applying Solarchvision, a computational platform developed by Mojtaba Samimi. Since urban heat island is an invisible phenomenon, some decision makers do not prioritize it on their agenda and allocate the budget to countermeasure it. Therefore, the model creates a common language to interact with various stakeholders smartly and assures that all of them perceive challenges and they are consistent with others in solving problems.

In addition, it provides a new insight for architects, urban planners and landscape architects enables them to examine the advantages and disadvantages of small and major decisions in relation to the sun, climate patterns and future extreme weather conditions in each location.

In fact, the model provides a platform to:

The model is able to overcome some obstacles and bridge the gaps:

The model can be replicated in any cities around the globe. 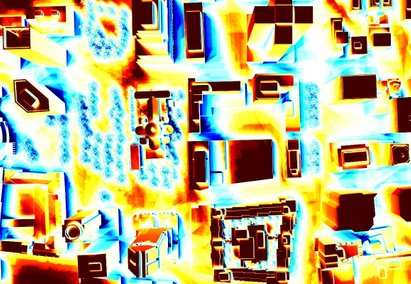 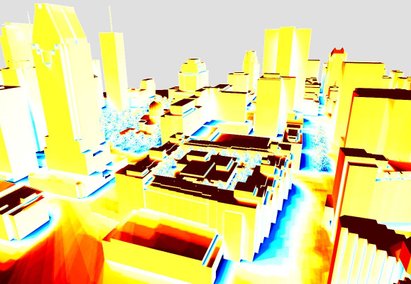 THE IDEA OF THE DESIGN

We designed a public space for the target site called ‘‘Oasis’’ to mitigate the urban heat island (UHI) effect, provide thermal comfort and a pleasant environment for not only the inhabitants but also for visitors.

The place invites people to interact, communicate, cool down, and relax especially during the hot summers in Abu Dhabi. Inspired by real oases and their microclimatic effects, the 40m structure resembles a tree and features a dense and elevated greenery with a water fall covering five floors. We created a small cool island by providing shadow and blocking the solar radiation through greenery and the shape of the entire structure as well as using natural and high albedo materials.

Since the UHI occurs in different levels ranging from sub-surface to air, the elevated greenery mitigates the UHI effect through the vertical mixing of air and can improve air quality indirectly through the reduction of surface temperature and thereby reducing thermal air movements. The greenery alleviates UHIs directly by shading heat absorbing surfaces, and indirectly through evapotranspirational cooling.

From an urban climate planning point of view, the structure can interrupt microclimate changes in the urban canyon through its shape and characteristics, decrease the anthropogenic heat and the energy consumption in the surrounding buildings.

Besides, the place offers a real surprise in the urban setting for people who stumble across it accidentally and becomes a meeting point for various people as oases have been in the past. In fact, these sorts of surprises can act as a magnet and distract the people from the harsh sealed urban areas with hot climate. It lets them enjoy a comfortable, cool zone as well as it increases the inhabitants’ satisfaction and their health.

The Oasis also adds value to Abu Dhabi and the neighbourhood that it is located in, while providing identity and a site for cultural activities.

However, it is impossible to tackle the UHI effect in whole Abu Dhabi just by implementing one project in an urban area. For this reason, the replicability of the idea was considered in the design process. The hollow and prefabricated structure has the potential to be extended, adjusted and replicated in various urban areas. This can provide plenty of urban Oases and lungs to let the city breathe, cool down and move towards urban climate change resilience.

We tried to tailor the modern architecture and state of the art technology to the local context through the structure shape and its details.

Located between buildings, the Oasis creates many environmental, economic, social and aesthetical benefits for the local neighbourhood.

The Department of Municipalities and Transport (DMT) of Abu Dhabi

The overall goal of the project is a collaborative contribution to Kuala Lumpur towards becoming a sustainable city region as defined in the New Urban Agenda and the United Nation Sustainable Development Goals (SDG) – especially in respect to three goals: 1. Goal number 3: ‘good health and well-being’; 2. Goal number 11: ‘sustainable cities and communities; and 3. Goal number 13: ‘climate action’. To achieve the goal, the project will address microclimate changes like urban heat island effects to reduce carbon emission and increase energy efficiency in ''Golden Triangle Area of Kuala Lumpur''. The novelty of the project is the development of a ‘Climatic 3D Model’ to identify the negative effects of urban heat islands in its different dimensions and the best responses towards their reduction. By that Kuala Lumpur city will strive to improve the infrastructure (building), raise the quality of life, foster competitiveness and upgrade municipal services. Examples for such measures would include optimization of the climatic performance of the buildings and urban areas (e.g., shading, openings, material and etc.). The local counterparts explicitly expect from our German team methodological support for local adaptation and better knowledge about up-to-date international experience and know-how. In operationalizing the Project Objective, the following 5 results shall be achieved in R&D and Implementation phases:

Ministry of Housing and Local Government

IN INFORMAL AREAS AND REDUCING URBAN HEAT ISLAND IN CAIRO

The project addresses two problems areas Urban Planning and Climate Change, which are of central concerns towards the aim of advancing sustainable urban development in Egypt. It explores possible means of environmental improvement for open public spaces in Cairo’s informal settlements. An integrated approach is intended to:

2.Significantly reduce the recurrence of heat islands; and

1.The environmental assessment tool of outdoor spaces in informal areas;

3.The model for improving environmental performance of outdoor spaces in informal areas; and

(RUPD has been subcontracted by GLOBUS)

The aim of the project is to improve energy-efficiency, health, comfort and safety in all living spaces, by suggesting design guidelines using the available climatic data for both active and passive strategies. In this respect, the analysis of the current situation to find the hot spots, forecasting future scenarios and the development of intelligent alternatives are fundamental steps.